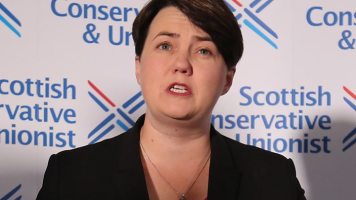 Ruth Davidson got her pals in the media to try to scam the public into believing she was a different type of Tory. They pushed the line that she was the saviour of the Tory party managing to get their support in Scotland up to around the level of Thatcher (i.e. not very much at all), the workings of the proportional representation system helped them achieve more MSPs (but still some got elected with ridiculously low constituency votes – Annie Wells?) and of course she was the Boris sceptic – voting for every other candidate than the blond buffoon and each time she backed them they fell out of the leadership race. She was meant to be a new type of Tory a working mum resigning from the party’s leadership to concentrate on her new born baby.

What a crock of shit!

Her political achievements were more about dodgy fake news than actual political change. She ended up with 13 MPs who ignored her – so much for her leadership. She barely does any constituency work – stuck on either 1 or 2 surgeries since being elected. She had to resign as leader as Boris treated her with the same contempt as her MPs and it was clear that her political career had hit the buffers. If she had remained leader during the next general election she would have struggled to get her media pals to explain away why she lost all the Tory MPs in Scotland (according to most polls). And of course, standing down to spend time with her family was just an excuse to get more time building up her bank balance with a £50,000 PR job for only 24 days work per year. She has always been and will always be a political fraudster.

The complaints about her outside earnings are not just about the obscene amount of money she will earn as both an MSP and a PR advisor. It’s really about the damage she is doing to the credibility of all politicians, MSPs and the Scottish Parliament. Scotland’s Parliament was meant to be different from the archaic Westminster, it was meant to represent all the people of Scotland. It wasn’t meant to be like Westminster where PR advisors roam the corridors of power with parliamentary passes – getting to meet and ‘persuade’ politicians on a daily basis and with an open cheque book. Not that long ago the Scottish Parliament tried to tighten up its rules on lobbying. 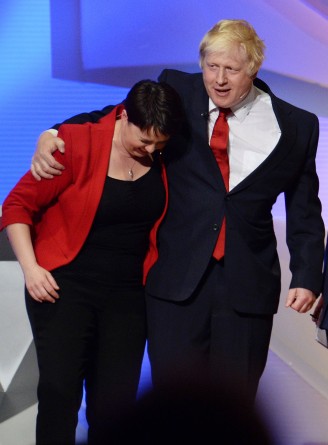 The parliament is for everyone not just those with the deepest pockets. There should be a clear distance between PR advisors and politicians. Davidson has smashed that pretence. She wants to openly play both sides – an MSP who will try to buy favour from her colleagues to support the political aims of her PR customers. If she ever held another surgery for her constituents should they expect to turn up with a cheque book/ bank card and pay for her services to represent them? There is a place for lobbying within any parliamentary system – charities and community groups do it to ensure new legislation is fit for purpose – similarly businesses and individuals do it to make sure legislation supports their aims. However, Davidson has crossed the line. We’re back to the worst excesses of the Westminster system – she has now signalled she is up for sale to the highest bidder. Her PR skills and media pals will have to work hard to limit the damage to her reputation through her greed. If anything it should put off potential PR customers – showing just how inept she really is.

When it all comes down to it Ruth Davidson is just another greedy Tory looking to line her own pockets at the expense of her constituents. Don’t wait for her resignation start campaigning to kick her out of Parliament.