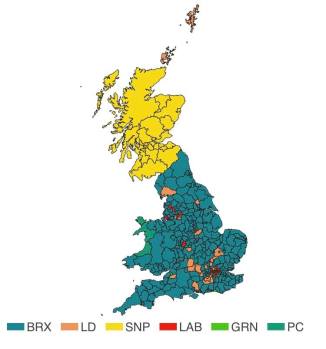 The results from the EU election show a clear political split from Scotland and the rest of the UK (mainly England).  The rise of the Brexit party was halted, while the SNP took a massive 38% of the vote entitling them to 3 MEPs.  This was the highest vote share of any party in Western Europe, the largest ever margin of victory for any party in a Scottish EU election and the first time that any party has held 50% of seats since the introduction of proportional representation in 1999.  The SNP won the vote in 30 out of 32 council areas, coming second in both Orkney and Shetland and even then, increasing their share of the vote. It may not have been the best turnout for an election, although better than previous EU elections, but it is clear the SNP got their vote out.

The biggest loser in Scotland was Labour, losing both their MEP seats, including long serving MEP David Martin, and trailing in at fifth place in the results table with around 9% of the vote.  Apparently, this was Labour’s worst result in Scotland since 1910 – their members must be wondering how long they can keep Richard Leonard as leader, he is ineffectual in the Scottish Parliament, continuously confused between devolved and reserved issues and has obviously overseen a very poor election campaign. 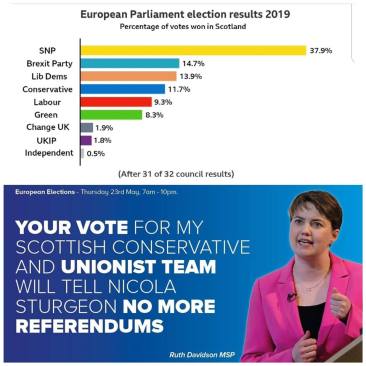 The Tory campaign – yet again – of making this election an attempt to stop the SNP getting another Independence Referendum failed spectacularly.  Their campaign was such a flop that Ruth Davidson sent out her deputy Jackson Carlaw to do the TV interviews.  Colonel Davidson must be hiding in a bunker greeting to herself after realising that she won’t be the next First Minister of Scotland!  Davidson plastered her own face all over the Tory leaflets endlessly obsessing about Nicola Sturgeon, the SNP and an Independence Referendum yet failed to make any inroads, with her party coming in fourth in the results table. If Davidson really believed in what she was saying in her literature then maybe its time for her to admit she was wrong and back a new IndyRef ….

aye, right – more chance of Nigel Farage walking into a milkshake convention than that ever happening!

Of course, the BBC spent most of the time going on about how great a result this was for Farage and the Brexit Party.  That was to be expected as they’ve been promoting him for years, with only the presenters of Question Time appearing on the show more often than Farage.  However, if you look a bit closer you see that the Brexit party has really just replaced UKIP and gained a few extra percentage points on the vote as well as a few extra MEPs.  A good result for a completely new party – but in reality it was UKIP by another name, the same secret donors (no doubt breaking electoral rules as has happened in the past) and just a few different fascists from before.

In terms of the Leave/ Remain division – it seems that nothing has been cleared up.  The UK is still hopelessly split on the issue and the real danger is that the Tories, fresh from this doing from Farage, will choose a nutter like Boris Johnson who will be desperate for a no-deal Brexit.  Tory members will see this as the only chance to take votes from the Brexit Party.

The Brexit impasse will not be resolved in Westminster.  Corbyn will lead his party into further abstentions as the clock ticks away to a no-deal Brexit by the deadline at the end of October.  Time will be limited to do anything else, will the Remainers in Westminster be strong enough to call for and win a second EU referendum? It’s unlikely.  Take into account the time for the Tories to choose a new leader, then it’s the summer recess followed by the autumn recess for the party conferences and that leaves around 4 or 5 weeks for any business to be carried out in Westminster.  That isn’t a lot of time, especially if you have a Prime Minister and an opposition leader who are both happy with a no deal option!

The other story from the EU election which has been dropped since the results came in was the missing EU citizens votes.  Has there been any further investigation into why so many EU citizens were denied their vote?  Was this a deliberate move by the Westminster political establishment, fearing that EU citizens were more likely to vote for Remain parties? Is this just another sign of the corruption in the failing democracy that is the UK?

Whatever happens now, it seems that too many voters in England have swallowed Farage’s crap – they believe he is going to make a difference. Yet the only difference he has made to now has been to inflate his own bank balance.  He is a political fraudster backed by dark money, from people who want to make money from selling off the NHS and other public services, from people who don’t want new EU rules tackling tax havens and money laundering and backed by not just the national press but by the BBC.  Yet again the BBC highlights that it is the true successor to Pravda.

However, in Scotland we have a lifeboat.  We can escape from the madness of Brexit and a UK that is becoming increasingly right wing and isolated from the rest of the world.  We can choose Independence.  It is up to us – Scottish Independence supporters – to make that change happen.  We don’t have to wait for Nicola Sturgeon or the SNP to launch an Independence campaign – we have to do it ourselves and do it now.  Sitting behind keyboards won’t win votes but by talking to your family, friends, neighbours everyone can make that difference. Scotland has a chance to escape the madness but only if we’re already doing the work to make it happen.  Let’s get out there, let’s start chapping doors, holding street stalls, rallies. marches – whatever it takes to persuade more people that the only escape from Brexit is Independence.